It's not the end, its a new beginning

As we started with a cliched "this is what it's like" post, we end with this "this is how it was" entry.  Except that it isn't the end - at least it better not be.  (I've got a few more blogs up my sleeve for a start).

The last three days of #DPC16 (I'm finding it difficult to stop typing that hashtag - muscle memory at its finest) and the first lead in day of #YDEF16 have been exactly how you'd imagine. Whirlwind, busy, chaotic, tiring and complicated... but also fun, eye opening, insightful, and inspiring.

Pretty much everyone I've spoken to on the last day has asked me the same thing; "How's it been?"  I think my answer's always been the same - incredible.  I probably ran out of proper superlatives at the end of the first day and just settled on that one.

I said at the very start that it's hard to describe the general buzz of the conference and I'm not sure I'm any closer to being able to articulate it now.  I don't suppose that matters too much.  What I think does matter is the messages that come out of the conference.  If you've followed along with any of my tweets, hopefully you've had a sense of both the content of the individual sessions as well as the overarching messages that I think have been present.

If not, I'm going to try and present that a bit more clearly over the next few paragraphs...

I wrote yesterday about how a lot of sessions had references to individual care, some more pointedly than others.  That really feels like the essence of a lot of what I've heard over the last three days.

People with diabetes aren't numbers.  My diabetes isn't defined by an HbA1c score of 6.6%, cholesterol of 3.2, BMI of 28 any more than the conference is defined by being 3 days long, having 3000 visitors and containing over 100 talks.  You don't get a qualitative understanding by looking at numbers - context is hugely important.

There was a clear sense that it's time to stop talking, and start doing.  I think that comes with some caveats though.  "Doing" something isn't always easy - and I think that's where a lot of us feel a sense of frustration, people with diabetes and healthcare professionals alike.   But I think that tide is changing.

I've been fortunate to sit in on some sessions where clinical teams are doing something.  Whether that's redesigning transition services for young people, putting together an integrated care model for repeat DKA admissions, or building a new way of delivering diabetes services for people across an entire CCG.  There are groups of people across the entire UK saying "I know what needs to be done, just let me do it".

Change can be a slow process.  Within an organisation like the NHS it can feel glacial sometimes.  But it's coming - you can sense it.  To me, it feels like there are so many people, doing so much to change care within diabetes that it's going to be difficult to hold it back.  You'll get swept up in it one way or another and have to decide whether you want to ride the wave or drown in it.

So where am I going with all this?  The title of this post alludes to the start of the next chapter for all of us.  The conference has been an incredible experience for me, as I hope it has for every single person there this week.  But what do we do now it's over?  Can we go back to doing what we've been doing?  Was that just three days of information and "oh that's interesting" seminars, or was it actually the start of something?

I walked out of the conference centre this afternoon with a range of emotions.  But the one that I hope to carry forward most of all is that sense of inspiration to do something.  I've been fortunate to meet a HUGE number of people over the last three days, clinical and #doc folk alike.  Every one of them talks about making things better, about changing what isn't working, about doing something... It feels like it's my duty to carry that on outside of the conference walls.

I think if even half the people at the conference leave with that same sense of inspiration and empowerment, the changes we've all longed for in diabetes care will be with us sooner than we all thought.  It's the end of the conference, but it's the start of something new. 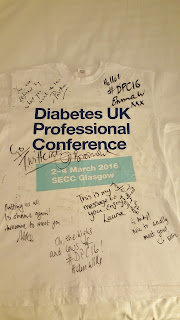 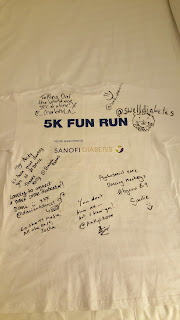 Thanks to Diabetes UK for the opportunity to attend the conference, to those who I met, however briefly, to those who stood at lecterns and spoke passionately about what they've already done and what they still strive for, and to those who followed along virtually... thank you.
Andy at 09:57
Share